We previously provided a brief overview of the compilation process in the LLVM backend. In this post, we will take a closer look at the first stage of that process: instruction selection. The aim is to understand how this works and how we can configure it before we look at the concrete implementation of our RISCW backend.

NOTE: The LLVM documentation has this short and clear explanation of how instruction selection works, so this post is mostly a re-statement of that enhanced with examples.

NOTE: The examples shown in this post are constructed using our skeleton RISCW backend. The source for that can be found here.

NOTE: Posts in this series:

The instruction selection process takes as an input the LLVM IR and outputs a sequence of instructions that use an infinite set of registers. The process is split into the following phases:

I think it is easier to learn whats happening by following an example. So we will consider how the simple C program below is transformed as instruction selection proceeds. The code has a function MUL that takes in a 64-bit argument x and a 32-bit one y. The arguments are multiplied and a 32-bit integer result is returned.

This is the first phase of instruction selection. It takes an LLVM IR as an input and produces a Selection Directed Acyclic Graph (DAG) as an output. Every other phase in the instruction selection process operates on the DAG until the output instruction sequence is emitted. As discussed a few posts ago, the LLVM IR is generated from the C code by a front-end tool, like Clang, and later optimized by the LLVM optimizer. Here is the LLVM IR for our simple C program:

A Selection DAG has the following properties:

WARNING! The type system in the LLVM backend is VERY limited. A lot of useful type information is thrown away when the input LLVM IR is converted to a DAG. Perhaps the most notable omission are pointer types which are completely absent from the list of types in the MVT class. As a result, pointers have integer type in the DAG, so it is difficult to tell whether a node, like an add, has integer or pointer operands.

Here is the initial Selection DAG that I get from the MUL function.

The entry node is at the top of the image while the root of the DAG is at the bottom. There is also a chain of nodes joined with blue edges starting from the root and ending on the entry node. These blue edges are the chain operands discussed earlier. In contrast, the black edges show the flow of data values such as integers and floating-point numbers. An equivalent text representation of this Selection DAG is shown below:

As far as I can tell, these optimization phases are limited to running a compilation pass that combines groups of nodes into simpler nodes. To achieve this, LLVM has this huge C++ file (>20,000 lines) that traverses the DAG and uses pattern matching on the nodes to identify and apply optimization opportunities. For example, the combiner could convert the nodes (add (add x, y), z) from the input Selection DAG into (add x, y+z) thus eliminated an add node.

The output Selection DAG of the first optimization pass is shown in the figure below for our example MUL function. Compared to the Selection DAG from the previous section, the optimized DAG contains the node t13 instead of nodes t3 and t4. The combiner was able to perform this optimization, which discards the most significant 32 bits of the 64-bit function argument x, because the multiplication in the function body and the return argument rely on 32-bit integers. Therefore, the DAG can be simplified by eliminating t3 and t4.

NOTE: Confusingly, the TargetLowering subclass of an LLVM backend is usually implemented in the <TARGET_NAME>ISelLowering.cpp file. You can find the RISCW one in llvm/lib/Target/RISCW/RISCWISelLowering.cpp.

NOTE: The XCore backend has a good example –and by good I mean easy-to-read– for using PerformDAGCombine and setTargetDAGCombine (see here and here). Also, take a look here to see how that backend combines the nodes add(add(mul(x, y), a), b) into the simpler target-specific lmul(x, y, a, b) node as the XCore architecture has a long multiply-accumulate instruction.1

The optimized DAG shown above contains a node t7 that produces a 64-bit value of type i64, but the RISCW machine is only 32-bit. The legalize phases take care of these problems.

The legalize types phase is run first. It converts the DAG to only use data types natively supported by the machine. To achieve this, it converts, or promotes, small types to larger ones; for example, a 1-bit integer of type i1 is converted to a 32-bit integer of type i32. Also the compiler breaks up, or expands, large integers into smaller ones, such as 64-bit integers of type i64 that are converted into 32-bit integers of type i32 in a 32-bit machine. The DAG below is a legalized version, with regards to types, of the optimized DAG shown before for the MUL function. In this case, the compiler decided to eliminate the t3 and t7 nodes to ensure that the new DAG only uses i32 integers. 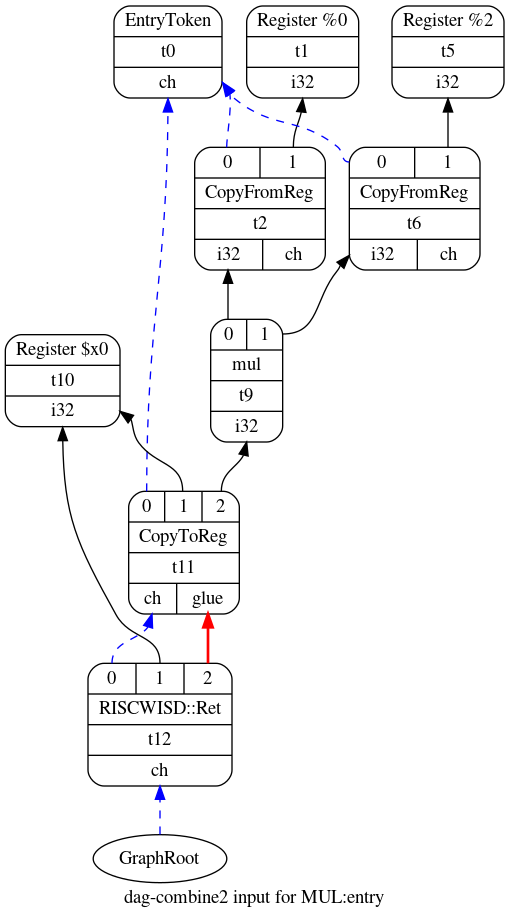 There are three strategies to legalize operations. First, the compiler can expand an unsupported operation into an alternative set of supported operations that emulate the required functionality. Second, a type can be promoted to a larger type that supports the missing operation. And third, the target can use a hook in its TargetLowering subclass to implement a custom legalization in C++.

NOTE: In future posts, I will explain how a backend can configure the legalization phases; this can be done in the constructor of the target’s TargetLowering subclass.

At this point, the DAG mostly contain nodes with target-independent operations, like add and subtract, along with a few target-specific operations, like RISCWISD::Ret. So we need to map these ‘abstract’ operations to concrete machine instructions from our target architecture; LLVM takes care of this in the instruction selection phase. The idea is fairly simple: the compiler pattern matches the nodes in the DAG to machine instructions. The patterns and descriptions of the instructions are provided by the developer of the compiler backend via code written in TableGen. Also, more complex pattern matching that is difficult to express using TableGen can be coded directly in C++. 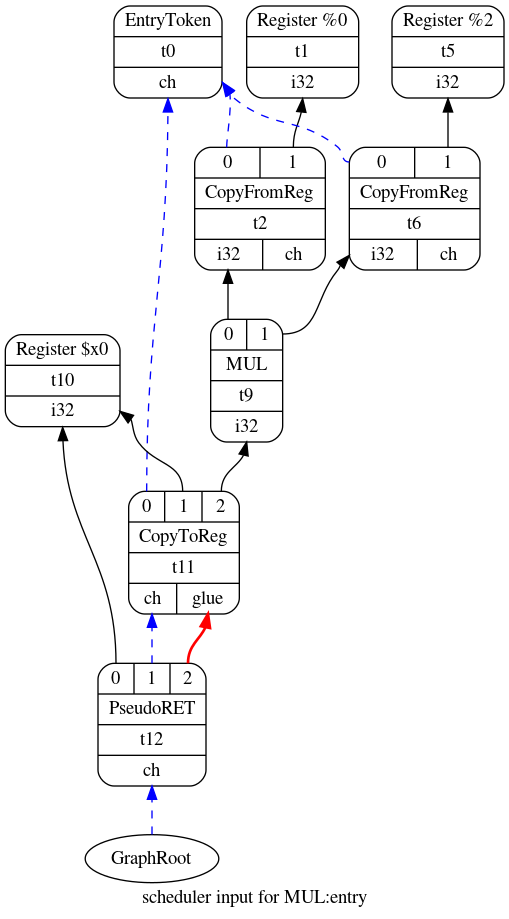 Thankfully, there is not much to say here as the post was getting quite long! This phase turns the DAG into a list of instructions according to some target constraints. For example, the target can specify its scheduling preference by calling setSchedulingPreference from the constructor of its TargetLowering subclass.

WARNING! Make sure you experiment with various scheduling preferences! Choosing the wrong one can significantly degrade the emitted code if the scheduling strategy does not match the features of your architecture and processor. The various scheduling options are listed here.

Below is the emited list of instructions for our MUL program. There are a couple of important things to note. First, the emitted code is still using an infinite set of virtual registers as opposed to actual machine registers; the compiler takes care of this problem later with register allocation. And second, there is already some liveness information that is useful for the register allocation process; for example, there are two registers, i.e. x0 and x2, which are live at the start of the basic block.